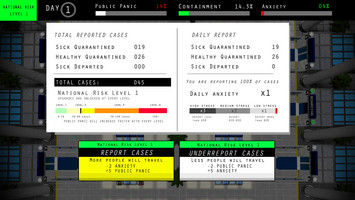 Hello everyone! The last few weeks were busy as I've finally been able to get playtesting going via Zoom. There's quite a bit of differences in version 1.2 from the original 1.0 version that was released early April. If you've only played the original version or version 1.1, I'd give the new one a try.

Report and Under reporting cases no longer affect containment percentages, instead, reporting adds public panic and decreases anxiety, where under-reporting decreases public panic and increases anxiety. This ensures that containment is only affected by your skills at Quarantine game play, aka how many people you quarantine per day and let out, rather than be affected by the daily report.

Added Difficulty levels. There is now easy, medium, hard, and expert levels to choose from. The different difficulty levels are an attempt to help players of all skills complete the game. Each difficulty has it's own high score to beat.

I'm still waiting for some feedback on the new changes from my play testers, so things will still be changing around. In the meantime, I hope you enjoy the new version!

Will you lie or tell the truth about cases?